Crustaceans are a subphylum in the phylum arthropoda along with insects, spiders and some smaller groups. Insects dominate on land but not a single species of insect can be found living below the ocean’s surface. A few spider relatives can be found there, for example sea spiders (pycnogonida). However, crustaceans rule in the ocean.

Crustaceans are the most species rich group of marine animals and can be found in all marine habitats. In the pelagic zone one group of crustaceans is perhaps more abundant than all other animal groups combined. These are the tiny copepods that can be found wherever in the world one dips plankton nets.

They form a very important link between phytoplankton, which they eat, and larger animals, that eat them. The most famous copepod is the red feed (Calanus finmarchicus), so named because it is red and is the main food of herring, juvenile cod and several other important fish species around Iceland.

Several other planktonic crustaceans can also be abundant, particularly the larger krill (euphausiacea) and smaller cladocerans.

A variety of crustaceans can also be found on the ocean bottom. Benthic crustaceans vary greatly in size. Many, such as amphipods, isopods and mysids, are insect-sized and are, as insects are on land, important for the benthic ecosystem as scavengers and grazers and food for larger animals.

Shrimp are intermediate in size and many species have been found in the ocean around Iceland. Only one is abundant enough to sustain catches; northern prawn (Pandalus borealis), commonly referred to as just “shrimp” in Iceland. This species is mostly found in the deeper channels off northern Iceland. Its close cousin, the aesop shrimp (P. montaqui) is more commonly seen when diving in shallower depths.Only one group of crustaceans is sessile, the barnacles (cirripedia). They are found in abundance on the seashore, but larger individuals occur deeper. It is a bit of a problem to find a mate when one is sessile. The barnacles solve this by having the world´s largest penis in proportion to body size. 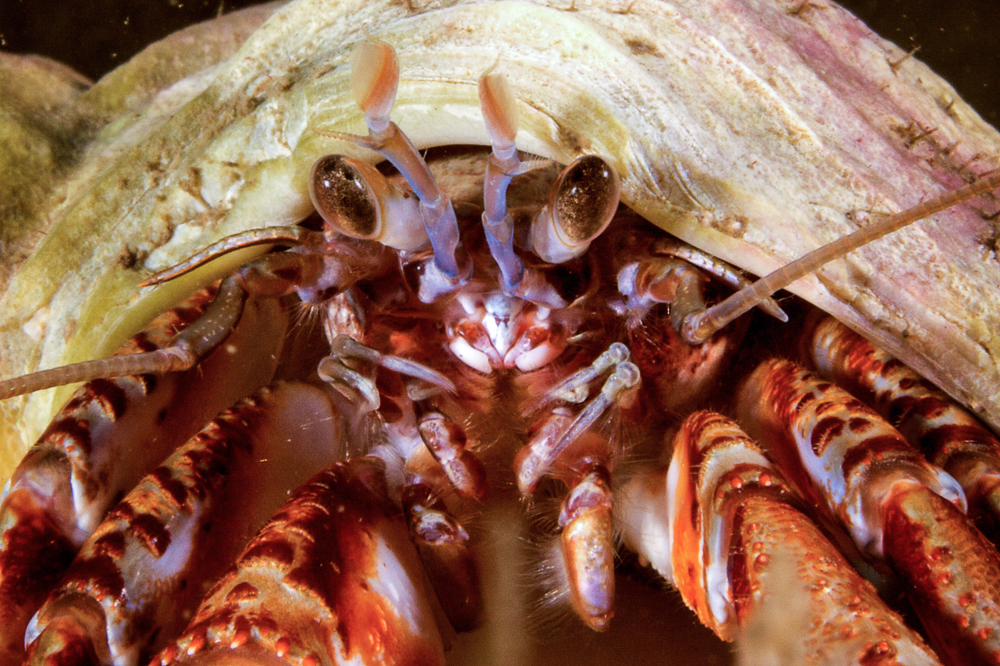 The largest crustaceans are the true crabs and lobsters. Several species of crab can be found in Icelandic waters, but no species is abundant enough to sustain commercial catches. Northern Iceland is rather poor in crabs. Only spider crabs (Hyas araneus and H. coarctatus) and hermit crabs (Eupagurus pubescens) are common there. Hermit crabs have previously been though to peacefully recycle empty snail shells when the former inhabitant was dead from old age. However, we have seen them aggressively try to help the former inhabitant to die.

Only one species of lobster lives in Icelandic waters, nephrops lobster (Nephrops norvegicus), which is an important commercial species. It is only found in the warmer waters of the southern part of Iceland. However, squat lobsters (Munida rugosa) can be found hiding in crevasses in northern Iceland. They look very much like lobsters but are smaller.