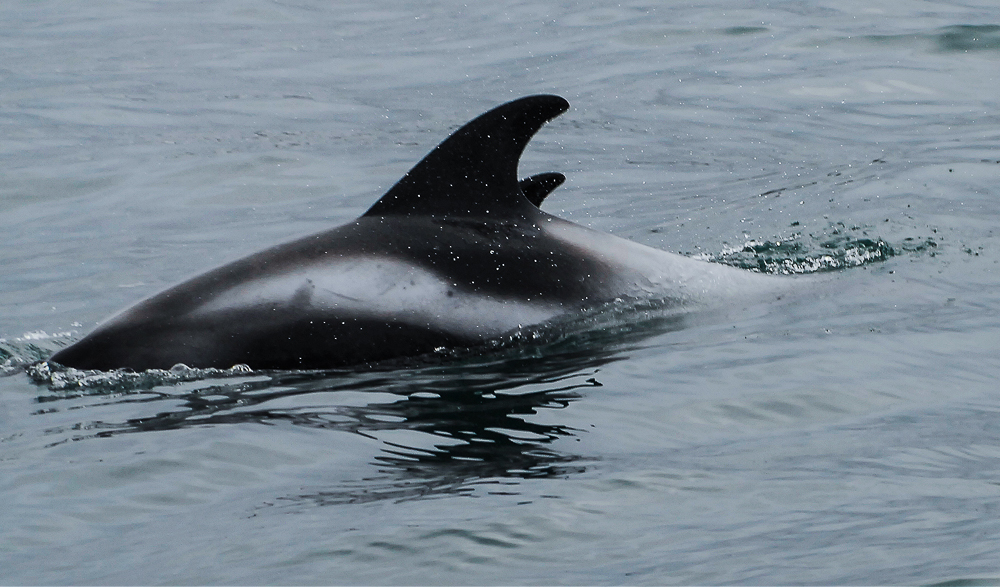 Seven species of the dolphin family have been found in Icelandic waters including the killer whale (Orcinus orca), which is the largest of all dolphins and the long-finned pilot whale (Globicephala melas) which are not often thought of as a dolphins. Other common species in Icelandic waters are the Atlantic white-sided dolphin (Lagenorhynchus acutus) and the closely related white-beaked dolphin (Lagenorhynchus albirostris).

Three dolphin species are occasionally seen in the warmer waters south of Iceland. These are the striped dolphin (Stenella coeruleoalba), the bottlenose dolphin (Tursiops truncatus) and the common dolphin (Delphinus delphis).

The white-beaked dolphin is the most common species around Iceland. It is found in abundance all around the country, both offshore and inshore, although they rarely venture very close to the seashore. In Iceland this is therefore “the dolphin”. Whale surveys in Icelandic waters indicate that they number in the tens of thousands.

They can reach a size of up to 3 m in length and 350 kg. The feeding habits are diverse; the species is often associated with capelin and herring which it probably feeds on. Recent studies also indicate that codfishes (cod, haddock, and saithe) are a common food source.

There has never been active hunting of dolphins in Iceland, but they do sometimes drown in gillnets. They were occasionally hunted in the past when the opportunity came. For example, when they were enclosed within drift ice. They might also have been harpooned from small rowing or sailing boats.

The white-sided dolphin is very similar to the white beaked dolphin but is smaller and slimmer. It might actually be more common than the white-beaked dolphin in Icelandic waters, but it is almost never seen close to land, preferring the open ocean. It also has a more southern distribution and is therefore mostly found in the warmer waters south of Iceland. A few hundred thousand animals are thought to be in the North Atlantic. Due to its distribution, white-sided dolphins have never been hunted in Icelandic waters and they rarely drown in nets.